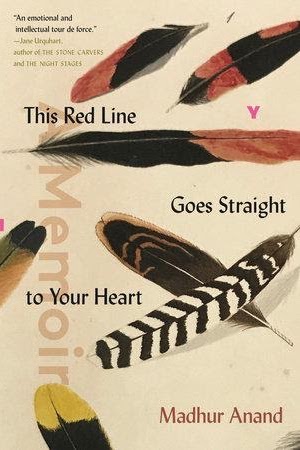 This Red Line Goes Straight to Your Heart: A Memoir in Halves
Penguin Random House Canada (2020)

Simranpreet Anand: I want to begin by asking you about the partition. In your book you use the partition as a starting point (depending on how you begin reading the book), as a metaphor, and as a structure for the narrative. How did you decide on the documents that mark the partition within the book?

Madhur Anand: The partition of India in 1947 is a starting point, but there are many directions the book takes and while the roads travelled are quite far in space and time (across several continents and across many decades) and disciplines (science, poetry, history), and personal transformations, there are no end points. I decided to add some copies of real documents because these documents supported my writing of the book as points of reference at least. My parents are not the kind of people who took or even kept a lot of photos or had things written about them. They had fairly simple, quiet lives from that point of view. I think I have only a handful of photos from their early lives in Canada and almost none from their lives in India, and zero from their lives as children or their birthplaces in pre-Partition Punjab. My parents did not even have birth certificates. Some of these are documents that confirm my parents’ training, education, and work experience. These documents are proof of identity for immigrants to new countries, and these pieces of paper are carried around in their original forever, because an immigrant’s identity is always under question.

But the word “document” itself is interesting. It comes from the Latin word "docere" which means "to teach." I felt these documents could also elicit emotions because of the way they look now. Some of them contain errors in my parents’ names or genders. Some of them are entirely in Hindi and I cannot even read them fully, but I still consider them proof of something. This is what it feels like to translate stories across language and across generations, there is always a loss. But I hope my book is now also a new kind of document. So, I sought to overcome that loss.

One of the documents has a large ink spill on it which happened one day when my mother went to get it copied. The clerk spilled the ink on it and my mother feared that would invalidate the document. The ink spill has the shape of some kind of new island or country showing up on an unchartered map. It could also be the shape of a blood stain. So, every document contains many backstories and so they can become objects of beauty and portals to other worlds themselves in that regard.

Now, because the book is in two parts, one telling my parent’s stories, and one telling some of mine, I wanted to add some documents from my life as well. But for me it was not as important to add things like my PhD degree etc., because I have less to prove on that side of things now that I’ve been a professor for 20 years, and also I am not a first-generation immigrant. But looking back, I saved many documents from my former life, when my identity was still undetermined, documents that could in retrospect be mined perhaps for evidence of my destiny (as my mother might say) to become a writer: one is my report card from Grade 1 which claims that is when I was ‘beginning to spell words for myself’ or that I ‘write interesting stories’ and one is some kind of writing exercise I did in Grade 6 in which I learn the definition of "metaphor." I don’t remember those lessons, but metaphor is a big part of my writing life now.

SA: I am really interested in the process of interviewing your parents for the book. You’ve recorded their oral histories and published them in a textual form. Can you tell us more about your choice of medium?

MA: Only that I am a writer, and so it came very naturally to me to want to record their stories through text. The challenge was to find a way to translate their oral histories (even when they were sometimes being told in English!) to another literary form, creative non-fiction. This ‘translation’ also allowed me to insert my perspective, because I wanted to somehow gift the stories with even more poetry and science, with everything that I had gained in the second generation, an idea that I think they certain felt was the case, that their children enriched their lives. I used an experimental and fragmented approach partly because that is how I often feel (as a poet and a scientist and a mother and a wife etc.) but also to honour the various ruptures of their own oral telling—that process and its shape and texture, the different languages, accents, tones, emotions —like one might imagine what painting the stories might do.

I used an experimental and fragmented approach partly because that is how I often feel (as a poet and a scientist and a mother and a wife etc.) but also to honour the various ruptures of their own oral telling

SA: Throughout the book you weave in poems, quotes, mentions of songs, tweets, things you stumbled upon. You also write about your work as a scientist, the research you work on, and the people you encounter. Do you feel there is a relationship between the non-linear presentation of your own narrative and the archival bricolage from which you would have constructed your parents’ narrative?

MA: This is such an astute observation. I think we are always challenged by the discreteness of time and space and memory when we try to tell stories or create narratives. One thing is to just acknowledge that discreteness which can indeed make things discontinuous and nonlinear, but also can also leave room for those cracks, for imagination, and even for greater understanding. The juxtaposition of different narratives and different pathways of knowledge and emotion can also be strangely illuminating. It’s funny now to write that word “discrete” and realize that it shouldn’t be confused with “discreet.” The reality is, all our lives are fractured by multiple identities and histories, and I think it’s useful to explore that idea in the form of fractured and asymmetrical texts.

The juxtaposition of different narratives and different pathways of knowledge and emotion can also be strangely illuminating.

SA: When writing your parents’ narrative, you contextualize the space and time with happenings around the world in science and culture. What was the process of learning those pieces of information like, how did you decide on what to include?

MA: Some of the pieces of information, like for example the quote from Darwin’s On the Origin of Species, or from restoration ecology textbooks, or even from my own PhD thesis Towards a Theory of Vegetation Dynamics, were already in my head somewhere, and I just recalled them, at least the reference to them, in certain contexts. But for others, I really did explore the world of physics, both in the disciplines that examine symmetry-breaking and in the history of the development of theoretical physics. I learned a lot writing this book. I read many books and the contextualization came very naturally, and coincidentally. There were many instances when I would be thinking something about my parents’ histories and then finding some exact reference in a textbook or even in a novel I decided to read (often because I suspected it would inform the work) that spoke to it directly. I also actively sought out Indian writers from the places and times of my parents’ youth (Bedi, Manto, Bond, Mehrotra), because I knew I would find in poems and novels that which was missing from history and science textbooks. In my scientific research, I work in many disciplines and with complex systems theory, and I think a certain kind of interdisciplinary thinking can help identify these connections and universalities among what might seem to be disparate things.

SA: When reading your work something that really struck me was the openness and detail with which you’ve told your family narratives. There are multiple instances in your personal narrative where we you note that you are choosing what to tell and what to hold back.

I think when we accept that at some point all our stories are just one collective story of humanity, we become less sensitive to the fact that they are personal or secret.

MA: At this point, I think I made the right choices about what to tell and not tell. The YES/NO thing was from a very small part of a 3-hour workshop I took with the writer Sheila Heti in 2018. It was just an experiment, but it seemed to be useful. This idea of what to tell/not tell for me amounted more to the question of how to tell these stories, which took a lot longer to figure out. Once I figured that out though, it became clearer what would inform the overall project and what wouldn’t. We actually ended up cutting several thousand words and entire stories from the book in the end. On the other hand, there are entire parts of my life I haven’t yet written a single word about which involve very significant things both personally and professionally. I just think those stories would have detracted from the first impulse of this book, which was to write my parents’ stories from my perspective as an established poet and scientist. It’s not that I actively filter myself when writing, I don’t feel I do, but maybe at some point one needs someone else (children? friends? strangers?) to write some of one’s own stories. Maybe they are already being written by other writers, maybe even in fictional form. It is often sufficient to find ourselves in stories written by others. I certainly hope many will find something of themselves in my book. I think when we accept that at some point all our stories are just one collective story of humanity, we become less sensitive to the fact that they are personal or secret. Maybe not all our stories need to be put into books, some can just remain in the ether, as all stories, both told and untold, ultimately have an effect on us collectively. Every writer needs to figure out where that point lies for themselves. 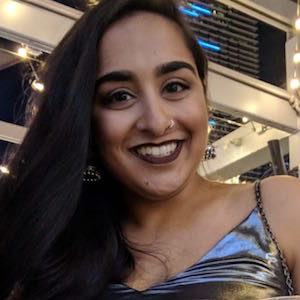 Simranpreet Anand is an interdisciplinary artist and is committed to a community engaged practice. She is currently working as an Engagement Facilitator at the Surrey Art Gallery and Curatorial Assistant at Western Front. View bio. 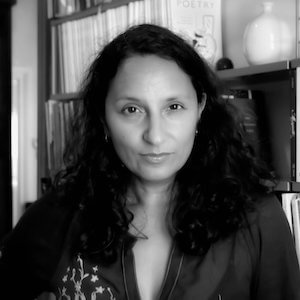 Madhur Anand is a full professor of Ecology and Sustainability Science at the University of Guelph. Her award-winning prose has appeared in a number of magazines including The Puritan, Brick, and The New Quarterly. View bio.